November 15th, 2013 - Folks, the following is an article on the state of al-Qaida in 2013 that I was asked to contribute to the "Security Times", a special edition of the "Atlantic Times". The original online link is here (and the original layout is nicer, of course, too). I hope you enjoy it - and I am excited about your comments. I would also like to thank some of you for your input, namely Leah Farrall, Will McCants, Greg Johnson, Aaron Zelin, Andrew Lebovich and Raffaello Pantucci. Don't hold them responsible for any of what I say here, though - they were just kind enough to comment on the draft!

In September 2013, al-Qaeda published a five page Arabic document called “General Clarifications for Jihadist Action.“ It was authored by Ayman al-Zawahiri, the Amir or leader of al-Qaeda, who had been Osama Bin Laden’s deputy and became his successor after the Saudi was killed by US Navy Seals in May 2011. The document is fascinating for many reasons, but especially because it isn’t addressed to a Western audience as speeches by al-Qaeda’s leadership often at least partly are for propaganda purposes. Instead it is, in Zawahiri’s own words, addressed to “the leaders of all entities belonging to al-Qaeda and to our helpers and those who sympathize with us” as well as to “their followers, be they leaders or individuals.” 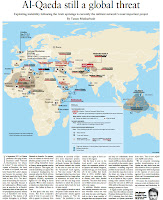 This is a large group of people. And it is noteworthy that al-Zawahiri doesn’t seem to be placing a lot of emphasis on the brand name of his group. Instead everybody is invited to feel addressed. So what is al-Qaeda in 2013? An open network? Or still a hierarchical organization? Is it a network of networks? Or a system of franchise operations?

The truth is that al-Qaeda in 2013 is all of the above. Al-Qaeda can be structured as it is in Yemen. But it is also open, given that the central leadership has repeatedly asked sympathizers in the West to act in its name and on their own initiative. Al-Qaeda’s presence and influence can be obscure as is the case with the co-operation with al-Shabaab in Somalia. Or opaque, as it is in relation to various local Jihadist groups across the Arab world calling themselves Ansar al-Sharia, whose agendas overlap with al-Qaeda’s. Then again, the central leadership can appear like a company’s headquarters, for example when the North African branch, al-Qaeda in the Islamic Maghreb (AQIM), reprimands fighters for not filling in forms properly. Wile in other instances al-Qaeda even hides behind other names – like Jabhat al-Nusra in Syria.

At first glance this may seem erratic. But from al-Qaeda’s point of view it is an asset to be able to appear in whatever form may be best at a given place or moment in time. The case of Jabhat al-Nusra, now probably the strongest faction in Syria’s civil war, illustrates that: Even though the group was set up by al-Qaeda in Iraq, it didn’t use that group’s name so as to not alienate Syrians. Only after its support base had solidified, did the group admit to being part of the al-Qaeda nexus.

It is partly by this means that al-Qaeda over the past two years managed to establish bridgeheads in Arab countries destabilized by rebellions. In Libya and in Egypt’s Sinai Peninsula for example it is quite evident that al-Qaeda plays a role – in all but name. Should al-Qaeda cadres one day feel they would benefit from the brand name, they will introduce it there.

The exploitation of the unstable situation following the Arab rebellions is currently al-Qaeda’s most important project. At first the uprisings weakened al-Qaeda because the Jihadists had always claimed they would be the ones to cause the fall of the “tyrannical“ Arab regimes, or “the near enemy.” But this ideological defeat has since been compensated for by a huge influx of volunteers, an active role in Syria’s civil war and large areas elsewhere in which the network can operate fairly freely for lack of state control.

After roughly a decade in which al-Qaeda’s main interest was to plot spectacular attacks against Western targets, or “the far enemy,” the pendulum is now swinging back toward the near enemy. This is not only a strategic decision by the central leadership. It is also what most new recruits are interested in.

This is not to say al-Qaeda is no longer interested in launching attacks on the West; Al-Zawahiri called for them. And al-Qaeda’s branch in the Arab Peninsula (AQAP), headquartered in Yemen, is likely still devoting resources to that end. Of all groups in the nexus they have the greatest capabilities to do so. With Ibrahim al-Asiri they have a master bomb maker in their ranks who has already proven his expertise when AQAP tried to down a US jet in 2009 and two cargo planes in 2010. Furthermore, AQAP’s Amir Nasir al-Wuhayshi has recently been promoted to al-Qaeda’s overall Number 2. He will want to prove his ability, and an attack outside the region is hard currency in this regard.

But the focus is now on the Arab world – and on Africa, where the expansion politics of al-Qaeda in the Islamic Maghreb, started years ago, are now paying off. In the conflict that shook Mali in 2012, AQIM’s fighters played an important role, in alliance with other Jihadist networks. They have been driven out of Mali’s towns since, but are still in the region. In addition, Jihadist veteran and training networks now connect Northern Africa not only with Mali but also with Nigeria. Add to that a large number of weapons that were acquired from the Libyan army’s depots, and it becomes quite clear that a string of African states in which militant Islamists are active may witness eruptions of violence instigated or supported by AQIM in the years to come.

In Somalia meanwhile al- Shabaab may be under pressure; but as the attack on the Westgate shopping mall in Nairobi, Kenya in September 2013 demonstrated, the group is capable of high profile terror attacks. They may have been helped by AQAP. But in either case there is little reason to assume that strikes like this will not happen again as long as African Union forces are fighting al-Shabaab in Somalia.

In the Middle East prospects are equally bleak. The demise of the Assad regime is clearly not the only aim that Jihadists are pursuing in Syria. They want to establish an Islamist proto-state; and they are enthusiastic about the proximity to Israel. Approximately 6,000 non-Syrian Jihadists are currently in the country, many have battlefield experience. They constitute a troubling long-term problem in any scenario. Concerns over what they may plan to do in the future are rising in Jordan, Lebanon and Turkey – even more so as al-Qaeda in Iraq is perpetrating mass casualty attacks at almost the rate seen in 2005 and 2006 while at the same time maintaining a presence in Syria.

In Egypt another pressing issue exists: Since the military unseated President Mohamed Morsi in July 2013, Islamists there feel disenfranchised. Al-Qaeda is interested in winning them over. It is partly for this reason that al-Zawahiri in his “guidelines“ portrays al-Qaeda as a group that will not use excessive violence and has a clear agenda. Egpytian Muslim brotherhood supporters are not natural allies of al-Qaeda, but a more focused, more civil version of that group may be attractive to some. A lot has been written in the past few years about the alleged end of al-Qaeda. Certainly, the US drone campaign has killed many important leaders and diminished the group’s capabilities.

But al-Qaeda is once more proving to be very resilient – because it is able to adapt. Just as it did, for example, at the beginning of the Afghanistan war when the group all but gave up its safe haven and ordered most cadres to go back to their home countries to continue the project from there. This is how AQAP and AQIM came about.

We are presently witnessing another transformation, as al-Qaeda not only shifts focus but also allows for more co-operation and integration with local groups at the expense of micro-management by a central leadership, which can’t be maintained under these circumstances. Of course this transformation comes at a risk: Al-Qaeda is lacking coherence and leadership. In almost every theater there are severe internal conflicts. AQIM has splintered; al-Shabaab assassinates dissident cadres; in Syria al-Qaeda is present with two groups at the same time, one loyal to al-Zawahiri, the other to the AQIM leadership.

All of this has weakened al-Qaeda. The organization is not in good shape – as an organization. But what could be called the global Jihadist movement – with al-Qaeda at its helm – is faring well. The net result is as troubling as it is evident: Al-Qaeda and its allies are as big a threat to global security as they have ever been.