A German Fighter with the "Islamic State"

December 4th, 2013 - It was bound to happen some time, and it happened last Saturday: The "Islamic State in Iraq and Greater Syria" (ISIS) presented their first German language video, introducing in it their first German recruit in Syria (that we know of): A young man calling himself "Abu Osama". 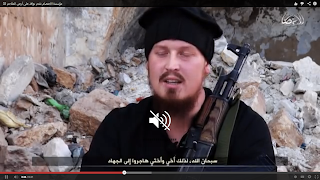 By now it has been established that "Abu Osama" is a 26 year old convert named Phillip B. from the West German city of Dinslaken. According to our information at DIE ZEIT he left Germany roughly half a year ago. He seems to have been part of a group of five or six, all of whom have by now returned to Germany, except, of course, for him.

In the 10 minute video, "Abu Osama" calls upon Muslims in Germany to join the cause since fighting Jihad in Syria is an obligation. He says "Syria is a blessing" and that there are safe areas, even for children and families. He says he chose his kunya out of adoration for Osama Bin Laden, but he does not threaten Germany.

He shares with his audience the information that he embraced Islam about four years ago and that his journey is the answer to his questions about the meaning of life. He poses with an assault rifle, but he doesn't divulge anything about participating in combat.

"Abu Osama" isn't the first German Islamist to show up in Syria by a long shot. The official estimate  here is now at "above 220" according to the head of domestic Intelligence, Hans-Georg Maaßen, whom we are quoting with this number in tomorrow's edition of DIE ZEIT. Please note, though, that this number isn't a head count.

The question now of course is: What does it mean that we have at least one German member of ISIS? Because before last Saturday, we weren't sure at all where they end up. There were signs of a cluster of Germans forming around a media unit calling itself Sham Center, but that was pretty much it.

I think that it is troubling. ISIS is by far the most ruthless and brutal of organizations in Syria. It also is the group where I believe the issue of an internationalist agenda may come up first. In addition, Germans in Waziristan have shown a clear tendency to follow one another and then form little groups around those who got there first. We therefor may see more Jihadists from Germany within ISIS ranks soon.

What adds to this concern is another piece of information we learned about during our research for our ZIET-story: According to our sources, Mohamed Mahmoud, an Austrian who already spent years in jail for terrorism charges and is known to have AQ-connections, tried to establish a German batallion of fighters under ISIS command but was turned down by that group for reasons unkown. What we do know is that he himself never made it into Syria but has nor for quite some time been held in Turkey under less than harsh conditions, meaning that he is still able to communicate with Jihadists in Syria, Iraq and Germany.

Mahmoud is considered to be part of the loosely knit network that also former Berlin Gangster rapper Denis Cuspert a.k.a. "Abu Talha al-Almani" belongs to. Abu Talha was injured in Syria a few weeks ago in an air strike. It is unclear what group, if any, he is associated with, but in the light of the ISIS video and the Mahmoud story he is definitely a person of interest.

In the mean time, I want to close this post with two more quotes of Hans-Georg Maaßen, head of the German domestic Intelligence agency "Bundesamt für Verfassungsschutz" (BfV) -- for all those of you who are interested in Germany's take on this.

On the issue that most Foreign Fighters active in Syria travel through Turkey, Maaßen says: "Turkey is an important factor in the region. We hope for and expect a significantly closer cooperation."

If you think those are the least subtle words you have heard so far from a German official, you may be right.

On the other other hand, Maaßen maintains that co-operation with the US remains unimpaired by the NSA affair: "Co-operation in fighting international terrorism is continuing unchanged. Information flows both ways, also with a view to Syria and travel pattern to that country."

And with that I will leave you for tonight. Even though something tells me we shall be discussing German Islamists in Syria again soon.