On the currently reported Threats against Germany - A Perspective

OK, from the echo on German news websites it appears like AFP ran an item tonight about a terrorist threat directed towards Germany. It sounds pretty alarming: If Filiz G. a.k.a. Umm Saif Allah al-Ansaria is not released from prison, attacks may take place in the streets of Berlin. The threat, according to these reports, was published on Shmukh forum just after it re-surfaced earlier today. German chancellor Merkel is said to be directly addressed in the threat. Mention is said to be made of the Toulouse incident.

I checked this out as best I could. And it turns out that such a threat has indeed been posted on the forum's general discussion area. I am at least pretty certain that the item I found is the item that caused the reporting. However, neither was it posted by the forum admins themselves (as it sounded from the reports) nor was its published or endorsed by any known Jihadist entity. The posting much rather seems to be the work of an exited agitator calling himself "he who will make al-Qaida victorious".

So, in other words: This is ONE posting by ONE unknown man on ONE website. It is, in my humble opinion, far less alarming than similar demands made by AQIM a few days ago -- who, by the way, seem to be holding a German hostage.

This kind of threat appears regularly on the forums, and while it may be an indication of a general mood among Jihadists or their sympathizers, it shouldn't be blown out of proportion. The posting is comparable to the recent posting of a picture of New York City in connection with the claim that AQ was to come back there soon in another forum: It is meant to excite people or scare them. But is in most cases unsubstantiated. (I am not saying, though, it should be completely disregarded. I am just saying that other kinds of claims, threats and messages need to be taken much more seriously.)

In this case though, I really wish somebody could bring it to the attention of AQIM and all the rest of those who want Filiz G. released from jail, that it REALLY REALLY looks like she will walk free very soon anyway. They just don't seem to be reading the news.

PS: If anyone of you is interested in the content of the posting: I have seen sillier ones; the author says that people like Mohamed Merah are everywhere and that they may strike at any time. You can read most of it in the (shitty) pic that I made of it just now. 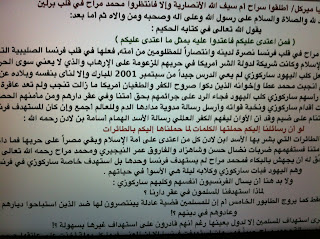