It is being reported at this moment by various sources that Abu Qatada was arrested in London and that he was told he will be deported to Jordan. Al-Qaida Central already put out a statement last week, basically saying that they want to punish the UK for this decision. This threat (because that's what it really is) has now been pimped and wrapped in a rather nice banner. So what's for sure is that al-Qaida wants us to notice it. Whether they will devote any actual resources in making it happen, is anyone's guess. 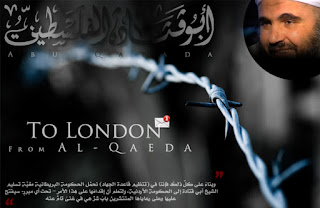