What should we make of the IS claim of responsibility?

1.- Does the incident at all look like a possible "Islamic State" attack?

I would put it this way: Downing a Russian airliner is quite conceivably something that the "Islamic State" would be wanting to achieve right now, given that the Russian air force has, among other groups, also hit the IS in recent airstrikes in Syria.

2.- What exactly has the "IS" claimed this far?

The most important item so far is the written claim of responsibility put out via IS and pro IS Twitter channels. It is in the name of the "Sinai Province" of the IS, of which we know that it actually exists. The format and style of the claim also resemble what we have been seeing in recent months, not only on a daily basis from within IS territories in Syria and Iraq, but also when IS "wilayat" or "provinces" (meaning branches) claimed certain attacks, for example in Kuwait or Tunisia earlier this year. This written claim is therefor either authentic or a fairly sophisticated fake.

In this claim, the IS Sinai province says that "soldiers of the Caliphate" had managed to down the Russian jet, killing all of the "Russian Crusaders" on board. It makes reference to the Russians killing scores of people in Syria every day and goes on to state that the Russians and their allies won't be safe in Muslim lands or in the skies above them. 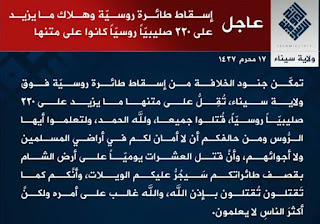 The IS Headquarters, however, seems to have elevated this claim to another level when it put out an audio version of the claim later today. This audio is a verbatim of the written claim but was published by the official IS radio station "al-Bayan", meaning that the IS central command or Headquarters or leadership or whatever you want to call it echoed the claim of the Sinai Jihadists and thus documented that they thought it was credible enough to amplify it.

Apart from that, the claim was also run prominently on the website of al-Shmukh, a top tier Jihadist internet forum. If they run it, they also think it is likely true.

Then there is, thirdly, a rather obscure video of 20 seconds length. As far as I can see, it was taken off YouTube already, but there is still an embedded version of it to be found here. 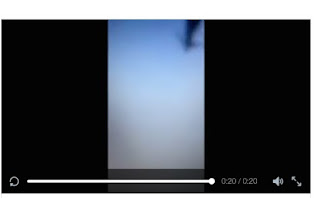 In this short clip, a plane is shown that eventually drops out of the sky, apparently hit by a missile or rocket or blown apart by an onboard explosive device. I don't think that anyone can confirm at this point that this video even shows the Russian plane in questions. This video is even more obscure because it carries no audio claim, but features, at the very beginning, the logo of the IS province in the Sinai - albeit an outdated version of it. 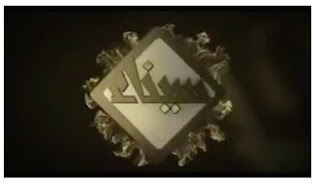 This makes me very skeptical of the authenticity of this particular video.

3.- Is the claim by the IS Sinai province credible?

First of all, it is important to note that the IS Sinai Province claim doesn't contain a single shred of information that would reveal insider knowledge of the attack or the modus operandi. No weapon system is mentioned, no information on what exactly it was that brought the jet down is offered. That is usually not a good sign.

Secondly, a lot of people who know more about jets and weapon systems than I do are saying that the plane was flying much too high for the IS to be able to hit it with the most advanced system at their disposal, which apparently are man pads. I will not weigh in, as this is a technical discussion. But as far as I understand we don't know yet if the jet was perhaps brought down by an explosive device onboard the plane - which leaves us with the theoretical possibility that the IS brought one there. These questions may, however, soon be answered by experts with access to the flight recorder, etc.

What makes me wonder in regard to the credibility of the claim is another thing: The IS usually doesn't lie. It does lie, to be sure, but not as a rule. And as a rule of thumb I believe it is fair to say that the bigger the operation or attack in question, the less likely it has been (so far, at least) that the IS was presenting a complete lie. This record is not impeccable, as especially in the beginning of the IS's expansion in Syria it seems that the IS was sometimes quite happy to claim responsibility for other groups' attacks.

However, the IS HQ is taking a risk here by amplifying the claim published by their Sinai group if it turned out to be a lie. Retaining credibility is of great concern to Jihadist groups: you can quickly loose support and supporters if you are caught claiming stuff you didn't do. It is not sustainable.

Bearing this in mind, I am wondering if the IS for some reason may really believe it was them - even if in reality it may not have have been them. Sounds crazy, I know. Just a thought.

* This incident should NOT be counted as an IS terror attack (yet).
* We should consider the written claim of responsibility by the IS Sinai province as quite possibly authentic, but not beyond doubt. Furthermore we should bear in mind that even if authentic, it can still be false or untruthful.
* We need to look closely at what the technical investigations will tell us.
* We should look out for IS publications containing credible pieces of insider information.

Email ThisBlogThis!Share to TwitterShare to FacebookShare to Pinterest
Labels: Internet, IS, ISIS, Sinai