September 18th, 2013 - The recent publication by al-Qaida's Al-Sahab Media Wing of a 5-page Arabic document by Al-Qaida's Amir Aiman al-Zawahiri is interesting for several reasons, foremost of which is that publications whose target audience is the actual cadre and body of sympathizers of al-Qaida have become rarer and rarer over the past few years; yet it is these documents that help us understand the organization better than videos and audios directed at a global audience with the intent to warn, scare or intimidate "the enemy". 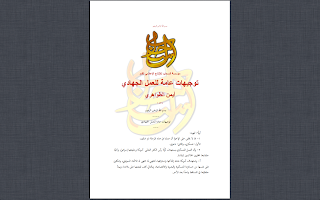 In this case, al-Zawahiri explicitly asks for this paper to be distributed among the rank and file of supporters, members and leaders of all groups "within in the community of Qaidat al-Jihad". So even though not everything that al-Zawahiris has to say is entirely new, some parts of this document titled "General Explanations about the Jihadi Work" are worthwhile taking a look at.

1.- Al-Zawahiri is trying to reinstall a sense of coherency into al-Qaida's activities. He tries to achieve this by making clear that all actions taken in the name of the organization have to be in line with the general narrative of al-Qaida being the vanguard of resistance against the "crusader onslaught" on Islam. I would say that this is an attempt to try and win back sympathies within societies where many people over the past years have started to mainly perceive al-Qaida as a force that indiscriminately murders people. Al-Zawahiri would like Al-Qaida to be seen instead as a group sticking to a particular mission which it follows on behalf of all Muslims. Thus he needs coherency.

2.- Al-Zawahiri also asks his cadre and fighters to practice restraint. Fewer Muslim and civilian targets and fewer attacks on Muslim "deviant" groups, he apparently hopes, will help serve the same purpose: Improving al-Qaida's image in the Muslim world. It is likely also for this reason that he demands that al-Qaida, as a rule, should only retaliate.

3.- I say "as a rule" here, because al-Zawahiri of course doesn't fail to make clear that attacking US and Israeli targets is always OK. By this, Al-Zawahiri is effectively saying: Listen, you can bomb away, if you like, but please stick to the few rules that I have come up with in the larger, strategic interest of this enterprise! He is not forbidding either violence or terrorism. He just wants it better explained and more targeted.

4.- It is not new that al-Zawahiri (or other AQ leaders, for that matter) ask for restraint. The AQ Central reaction to Abu Musab al-Zarqawis butchering in Iraq is one example. Abu Yahya al-Libi's fatwa against market bombs is another. However, I believe there is an additional factor at play here. Al-Zawahiri is an Egyptian, and he always looks to Egypt with special interest. Given that the Muslimbrothers there have just lost "their" president and claim to power by action of the army, al-Zawahiri knows that there must be hundreds, perhaps thousands of angry, radicalized, disenfranchised MB who are at the tipping point, because they have just learnt the hard way that playing the democracy game doesn't play out. These people are not naturally al-Qaida supporters. But a more civil, more restrained, more focused, more political version of al-Qaida could win their sympathies. I believe this is what al-Zawahiri is (also) aiming at.

Of course it remains to be seen whether al-Zawahiri's initiative will yield any results on the ground; I have doubts. But it may help him strengthen his own position within the organization. Until now his audios and videos have not been very impressive or inspiring. Now he has for the first time left a clear mark since he took over from Bin Laden. That is in itself an important step for him.

PS: This is an English version (not a translation) of a blog post from my German language blog on the website of DIE ZEIT, where I work.

PPS: Aaron Zelin has both, Arabic and English versions of the document on Jihadology.